Tools for Enabling the Next Stage of e-Government 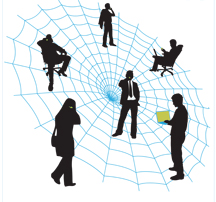 As e-government advances beyond the early stages of basic information access and simple interactions toward active engagement of citizens and agencies, the tools enabling this progression will be those that promote networking and collaboration while addressing issues of data portability, reusability, and longevity. The flow of information will be the focus as government adapts to new demands for sharing, accessing, and distributing information.

The transition has already begun as technologies and practices introduced within the past few years have had significant effects on citizens’ expectations and agencies’ ways of doing business. The proliferation of devices and access methods (wireless laptops, cell phones, iPODs, to name a few) have transformed how and when people retrieve informa- tion. Use of that data is also undergoing dramatic changes as Web leaders such as Google, Yahoo, and Amazon.com and once-small start-ups like MySpace, YouTube, and Flickr have altered our perceptions of information sharing and delivery. And more than perceptions have changed; behaviors are changing too. The past year alone has seen a marked increase in the use of blogs, wikis, and other collaborative software within corporate and government domains.

What does this mean for e-government in the coming years?

As a result, the keystones for the next stage of e-government will include:

Open document standards for government were first brought to national attention in 2005 when the chief information officer (CIO) of Massachusetts endorsed the OpenDocument format for all public records in the state. Three other states—Minnesota, Texas, and California—have subsequently introduced similar legislation. California’s bill would require that “all documents…produced by any state agency shall be created, exchanged, and preserved in an open extensible markup language-based, XML-based file format, as specified by the department [of Technology Services].”

Why this movement toward an open XML-based format? The answer is found not so much in what XML isfrom a technical perspective, but in what it doesfrom a process and management perspective. Because XML is an open standard, not owned by any vendor or tied to any platform, it creates an environment based on data portability, reusability, and longevity. Government agencies using XML as their document and data management foundation eliminate the danger of that data becoming unusable or obsolete as technology advances. XML also provides a structure for transforming and delivering information to any number of formats, which means cell phones, personal digital assistants (PDAs), and any new devices that come along in the future can be accommodated. And its independent, standards-based design ensures that content stored as XML will not be limited by the shelf-life of a piece of software or hardware.

Organizations using XML realize benefits in information consistency, data integrity, workflow management, and productivity. Several federal agencies in the US have adopted the use of XML including the Environmental Protection Agency, Department of Defense, Department of Education, Department of Justice, Internal Revenue Service, and the Office of Management and Budget. Benefits have even been seen in the use of XML at the state level. Through its implementation of a statewide Global Justice XML Data Model (GJXDM), Pennsylvania’s Justice Network set standards and policies for statewide data exchange, reduced development cycles from an average of nine months to approximately six weeks, and showed evidence for potential taxpayer savings identified in the millions of dollars.

Government services are not always provided at a desk in front of a computer. Therefore, government needs to accommodate the multiple ways (cellphones, PDAs, wireless access, and many others) and various locations in which government services are accessed. Data needs to be independent of specific delivery formats and reusable across all possible formats to support this changing world. And it’s more than just a “nice to have.” As we learned from the World Trade Center disaster and Hurricane Katrina, emergency situations depend on decentralized systems, redundant networks, and the ability to share information quickly and constantly with field staff.

Still, while wireless data service (i.e., the Internet on your cellphone) is a large and growing industry generating tens of billions of dollars in the US market alone, the potential of that market for government services has been mostly untapped. One major reason is that the Internet experience on a cellphone is much more limited in terms of speed and display due to the limitations of the devices (cellphones vs. desktop computers). And it’s a major undertaking to re-program Web content for the purpose of presenting it in multiple ways. Data formats, such as XML, that can easily transport across different types of devices, hold great promise for bridging this gap.

Mobile devices are increasingly being used in all nations, but their main growth in recent years has been in developing countries with an average percentage change of 22.8 percent from 2004 to 2005. This figure is even higher for Latin America and the Caribbean with a change of 41.8 percent in the same period. Moreover, according to the Information Economy Report 2006, mobile devices are the only indicator in which developing countries are ahead of developed nations in terms of absolute number of subscribers, with 1.2 billion in comparison to 810 million subscribers in developed countries.

With increasingly more sophisticated mobile devices, they could eventually become the main way to access the Internet in many countries; therefore, future e-government efforts should be sensitive to this possibility. XML offers an effective and efficient way to deal with multiple formats and devices without having to duplicate information. The adoption of XML by government agencies in developed and developing countries would not only facilitate this transition, but also proactively create the necessary technological environment for this change to occur. Given the significant difference in the relative cost between a computer and a cell phone, this could also have a dramatic impact on reducing digital inequality.

Web 2.0 technologies that encourage people to share information—blogs, wikis, and social networking and public posting sites—also make it easier to collaborate with others. Wikipedia is the most well-known of these community of practice sites, but the principles employed there are increasingly being seen within government agencies.

The state of Utah established a public wiki, called Politicopia, for citizens to create summaries of bills, pro and con arguments, comments, links, and more on pending legis- lation as “an experiment in open democracy.” Federal agencies such as the General Services Administration have experimented with wikis as a “faster way to work together, combining continuity, transparency and trusted relationships among partners.” And national news organizations such as the Wall Street Journal, The New York Times, and US News & World Report have reported on government use of blogs and wikis, including the CIA’s launching of its own internal wiki, which grew to 10,000 pages in two years.

Some of the most interesting activity in this area has occurred within the Office of the Director of National Intelligence (DNI), charged with reporting threats to the president and persuading the intelligence agencies to cooperate more closely. It began experimenting with the use of wikis and blogs in 2005. One blog test site focused on spotting and predicting possible avian influenza. Within two months of its inception, it was reported in The New York Times that the site “had become the govern- ment’s most crucial resource on avian flu.” Why? Because it encouraged collaboration and communication and made it easy to do. The transition was from a “need to know” to a “need to share” mentality. This shift in thinking about information and software development is radical. As Dale Meyerrose the chief information officer of DNI remarked in the same New York Times article, “We need to think big, start small and scale fast.” The blog software took only two days to be up and running; a dramatic change from the usual software development paradigm.

Over the past five years, CTG has worked closely with government agencies on investigating, adopting, and implementing strategies for data, content, and Web site management based on XML and associated open standards. This work has demonstrated the benefits in workflow improvement, cost reduction, and information consistency. Our current research has extended to the use of wikis, blogs, and other collaborative tools within project management and organizational settings. The future will see more widespread development and application of these tools in advancing the promise and capabilities of e-government.